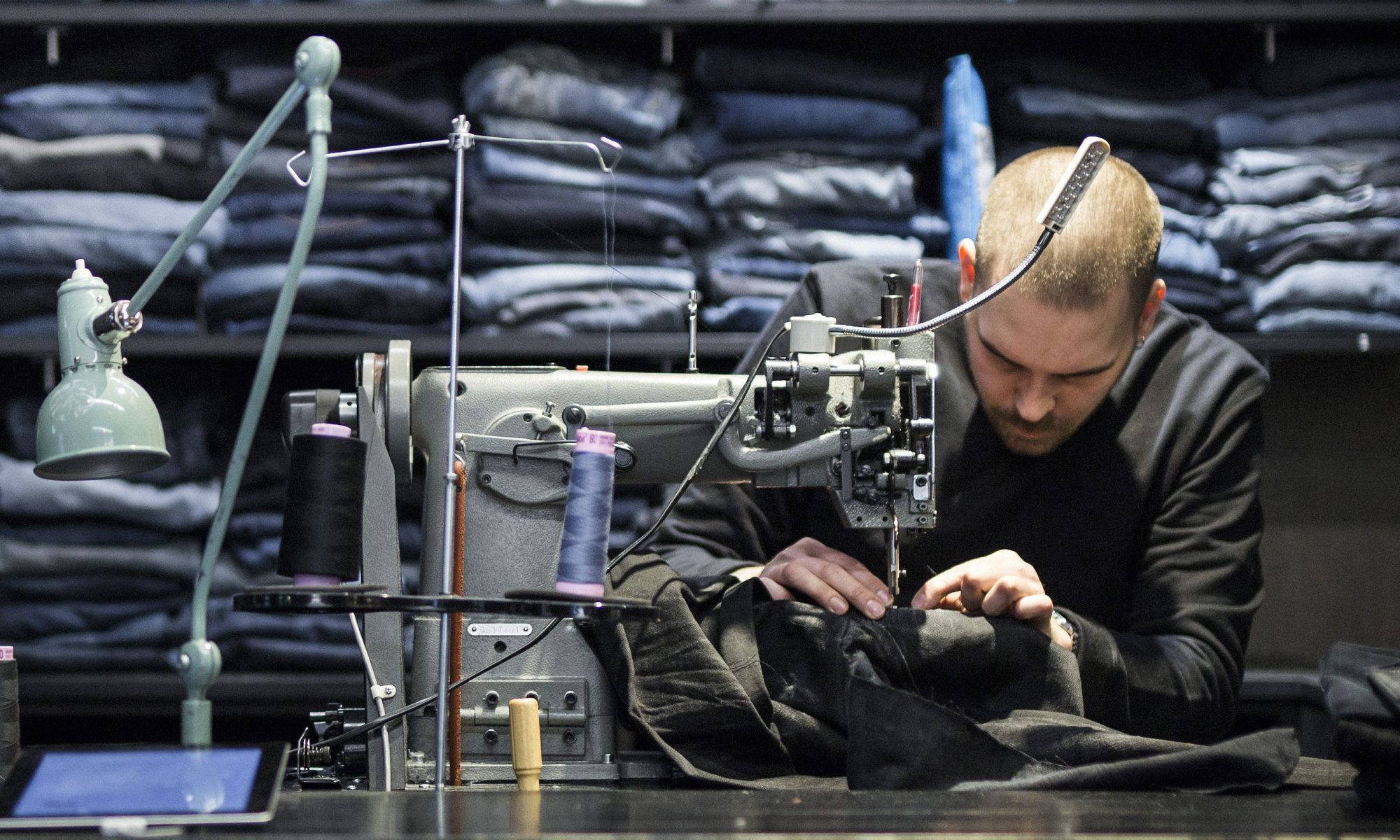 Set up in 2001 by Maria Erixon Levin, Joakim Levin and Palle Stenberg, Nudie Jeans is the Swedish brand that has managed to weave good ethics into its business, without making it the sole calling card. It’s one of the few companies that has managed to do so, gaining a reputation for making a great pair of jeans first and foremost, followed closely by a socially responsible outlook that many brands claim to have but very few actually do. Its passion for jeans is apparent throughout every aspect of the brand — from the small booklets that it slides into the back pocket of every pair it sells, informing customers of how to get the most out of their jeans, to its stores all over the world.

Believing that ‘the longer you wear your jeans, the more character and attitude they acquire’, every store Nudie Jeans owns has a repair shop within it where its customers can take in their fraying jeans and get them fixed for free. Once a pair of jeans has finally given up the ghost, they can be returned for 20% off the next pair, potentially turning one-time customers into repeat ones. From a short term financial point of view, it’s a strategy that appears to be ludicrous; whilst some brands attempt to make their products last for shorter periods of time to increase sales frequency, Nudie Jeans is going in the opposite direction. However, it’s one that seems to be working, with the brand quite comfortably in profit and living out the dream where it does ‘not envisage a trade-off between profit and people, or between manufacture and environmental responsibility.’

We caught up with Joakim Levin to find out more about how the brand began, how it’s grown, and the importance of having a good idea and sticking to it.

Why did you and your co-founders decide to set up Nudie Jeans?

Basically, we were fed up with what we were doing. Maria had been working for major denim labels for years and I had been in the music business. We both felt that we wanted to create something where we didn’t have to compromise on the fundamental idea. We wanted to build a brand or a company where we could work with good quality materials, the kind that are generally deemed too expensive and come from small suppliers who bigger brands won’t work with. We also had a very clear picture from the beginning that we wanted to address the environmental and corporate social responsibility problems in the clothing business. In truth, we never expected this to be much more than a small project that would keep the two of us busy.

Once you had decided to make the leap, what were those early years like and were there any notable turning points?

We experienced huge demand and grew quickly from, more or less, day one. The first five years, from 2001 to 2006, were just chaos. Trying to build an international company and having that pressure to keep up with expectations wasn’t something I had experienced before. Prior to Nudie, I had been a punk drummer! That, combined with having two young kids at the time, was pretty demanding. A big turning point was a few years ago, when we started the repair shops. That’s definitely taken us onto a new path with retail which is something I find really interesting. Before that, we were mainly a wholesale company.

Would you say Nudie was an international company from the beginning, or was there a defining point when that happened?

We never expected Nudie to become a big company so we tried to sell internationally from day one — which was a very successful move. We didn’t think that we’d be able to reach the production minimums by just selling in Sweden so it was more of a necessity than anything else. When we started up the brand, most jeans were priced at approximately 700 sek (around £55) and ours were 1000-1500 sek. We had no idea if the market was ready for that. To grow internationally is a challenge from both from a cultural perspective and a legal one — issues with customs etc — but the hardest part was finding the right representatives for the brand. I think we have been very lucky when it comes to that and it has certainly contributed to Nudie’s success so far.

The jeans market is notoriously crowded. What do you think you’re doing that the others aren’t?

That’s very hard to say. There are a lot of other brands who are doing well but are quite different to us. In my mind, there isn’t just one jeans market today — there are many more niches and price levels compared to when we started. We have always tried to be very consistent in what we are doing and not compromise in quality. We worked for many years to reach the goal of having a 100% organic denim and Fairtrade certified line, as with our Backbone range, and to roll out the repair service idea. I don’t think that any of these things alone is the key, but the sum of all that we have been working on for the last ten years or so might have created a space in the market for us.

Nudie appears to be the only clothing brand that has repair shops. Where did this idea come from and how well has it worked?

I came up with the idea, which I arrived at quite logically. Everyone in the office was wearing our jeans and eventually, they would break, as all jeans do sooner or later. We already had the machines available to fix them, so I thought we could just offer it as a service and see what happened — even if it was more of an environmental project than anything else. If we can prolong the life of a pair of jeans, making them last double the time, then we’ve cut the environmental impact in half. Since then, the repair service has worked out brilliantly and we repair over a hundred pairs a week in every store, which in turn, has increased the traffic in our stores.

What difference has it made having your own shopfronts as opposed to selling through traditional retailers?

It’s both challenging and rewarding. It’s a lot of work and a lot of capital is needed to build up an organisation that can handle multiple stores in different countries, but it’s given us the opportunity to work with the core values of the brand in a much stronger way, as with the repair service for example. The wholesale part of the business is still very important for us and will continue to be in the future, but we cant lean on someone else hoping that they will tell our story.

That story has become a big part of Nudie’s selling point. What difficulties do you face when running a jeans brand with a strong ethical vision behind it?

It’s not that complicated really. It’s about taking the kind of decisions that feel right for us and not asking for advice, because there isn’t really any advice to get. No one has a formula for what an ethical brand or company is, so you have to base it on your own beliefs. Some things we do make sense for us but wouldn’t necessarily make sense for others.

What other brands do you respect and think run their businesses well?

I respect anyone and everyone that has an idea of what they want to do and stays focused to that idea. That’s something we’ve really tried to do. Some of the brands I like might not make the kind of products I personally like, but I respect their way of taking what they do seriously and not just shopping around for what’s selling at the moment.

In terms of the future, what are your hopes and dreams for the brand?

To be able to keep on developing it. In many ways, I feel we have just started and going forward, I want to open more repair shops and build a stronger retail presence in our key markets. We have big plans to be more transparent and of course, keep developing the collection. The market has changed so dramatically over the last few years, so it’s all about trying to do your own thing.