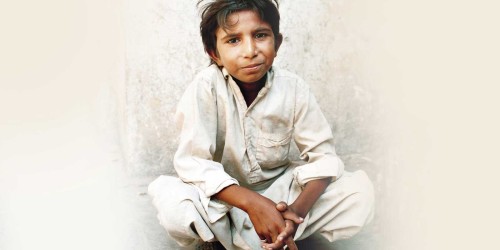 [Tim Ryan of the Solidarity Center is a CLC member, who wrote this piece on  May 3, 1995 for The Christian Science Monitor. Iqbal Masih was murdered on April 16, 1995]

Anyone who knew Iqbal Masih, the 12-year-old boy recently assassinated in Lahore, Pakistan, by someone believed to be a feudal landlord and carpet manufacturer, was struck by his brilliance.

I don’t simply mean his intellectual abilities, though once rescued from slavery at a carpet loom this young activist demonstrated a tremendous aptitude for learning. He went through five years of school curriculum in three. Although malnutrition and abuse left him, at the age of 12, physically smaller and more frail than my nine-year-old daughter, it was clear that his mind, his ambition, and his spirit burned brightly.

When I saw him last December in Karachi on his return from the United States, where he received a Reebok Human Rights Award, he was filled with the excitement of his first airplane ride, a new Instamatic camera, his visit with other schoolchildren in Boston, and the unimaginable promise that one day he might attend a university. Brandeis University had pledged to give a four-year scholarship to Iqbal when he finished his studies in Pakistan.

Then someone motivated by greed, by fear, by hatred, pulled the trigger of a shotgun and obliterated this promise.

I first met Iqbal last year through my work with the Bonded Labor Liberation Front as a representative of the AFL-CIO in South Asia.

The BLLF has worked dauntlessly for years to free thousands of bonded and child laborers, Iqbal among them. After working six years at a carpet loom, starting at the age of four, Iqbal was rescued by the BLLF when he was 10.

Iqbal’s rescue was due in no small part to his own guts. Last December he told me that one day two years ago in the village where he was enslaved as a carpet weaver, he saw BLLF posters declaring that bonded and child labor was illegal under Pakistan law and secretly contacted BLLF activists. At the risk of his own life, Iqbal led the BLLF to the carpet looms where they rescued hundreds of children, who might still be in slavery if not for his courage.

It seems medieval, and perhaps it is, but for years carpet manufacturers, brick kiln owners, landowners, and manufacturers of sporting goods and other products in Pakistan have maintained an unrelenting grip on bonded laborers and children. Some estimates run as high as 20 million bonded and child laborers. At least half a million children are employed in the carpet trade alone.

Because of the current tension between Islamic and Christian communities in Pakistan, some apologists want to paint the killing of Iqbal as a purely religious matter. On one level this is a mere smoke screen. But on a more complex and sinister level, there is some connection between the fact that Iqbal was Christian and the fact that he was pressed into slavery in the first place.

Iqbal’s story has an economic and political subtext: Politicians and businessmen in Pakistan form a tight web of relationships based on kin, clan, and caste. They count on family members who occupy positions of authority in local, provincial, national, and police bodies to look the other way when laws are violated, or, in many cases, to actively participate in crimes against workers and minorities.

Poverty is often the surface excuse for a problem that has deeper roots. It’s a fallacy to see Iqbal’s death solely as the result of brutal economics, rather than the outcome of broader, more pervasive violations of fundamental human rights.

On one level Iqbal’s story is surely economic — poor people have less education, less income, less power than the rich. Even though it was outlawed in 1992 under Pakistan’s Bonded Labor Abolition Act, the ”advance” system that bonds people to their employers continues unabated. This system ensnared Iqbal at the age of four. The BLLF has taken some cases to court, but police and employer intimidation, along with judges’ unwillingness to enforce the law, has prevented any prosecutions under the 1992 law.

It’s at a deeper, generally hidden level that Iqbal’s tragedy intersects with millions of Pakistani citizens and helps to explain the oppressive social and cultural patterns that are partly responsible for his death.

The fact is, most people who are bonded and enslaved are converted Muslims, indigenous tribal people, Hindus, and Christians — in short, anyone outside the mainstream of Sunni Islamic society. This insight reveals the intrinsic link between ”economic” or ”labor” issues and pervasive problems of intolerance and discrimination based on race, language, and ethnicity.

So we’re not just talking here about poverty and economic hardship, or one brave little boy’s death. We’re talking about enslavement based on race and language and religion, about the treatment of human beings as commodities, as slave labor, and the slow grinding to death of people who not only are denied economic advancement, but also a chance at education, decent housing, clean water — the things that make life livable.

Iqbal’s death must have a greater meaning beyond the tragedy of a bright meteor snuffed out by greed and corruption. His experience implores us to look beyond ”poverty” or ”economic hardship” as an explanation of why so many men, women, and children in traditional societies are exploited — to see the rights of child workers and bonded workers as part of a continuum of overall human rights that must be defended at all costs.