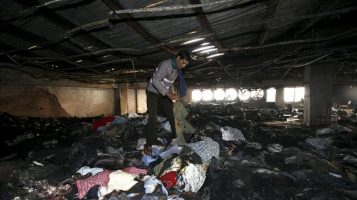 DHAKA (Reuters) – A fire in a textile factory in Bangladesh killed six workers on Wednesday before it was extinguished, police said, renewing fears about safety in the multi-billion dollar industry.

Bangladesh’s garment sector, the world’s second biggest after China, drew worldwide scrutiny after more than 1,100 people were killed in the collapse of a factory complex in 2013 and 112 killed in a garment factory fire in 2012.

Police said Wednesday’s fire started on the ground floor of a four-storey building storing chemicals and dyes in Munshiganj, 20 km (12 miles) from Dhaka, the capital, and spread quickly.

“The mill was closed when the fire broke out but there were some workers in the factory and six bodies, including one female worker, have been recovered,” a police official, Alamgir Hossain, told Reuters by telephone.

Firefighters had put out the blaze but it was not immediately clear if more workers had been trapped, he added.